Remittance has dropped for the straight third month. Tourists are not coming. The foreign exchange reserve is depleting at a faster pace. A large amount of paddy crop was destroyed by October’s unseasonal rainfall. Inflation rate is on the higher trend. The country is seeing a liquidity crunch.

What do all these indicate?

Nepal’s economy is in the doldrums.

And there’s a new worry growing. It could be big.

Nepal is staring at a severe shortage of chemical fertiliser that could last for months—or even a year—which could drive up food prices, leaving poor countries like Nepal to face a severe food crisis, economists have warned.

He is sowing mustard by using half the usual amount of DAP. Parajuli is waiting for state-subsidized fertiliser stocks to arrive. But he is less likely to get the farm nutrient. One-fourth of his land still remains fallow. “Production is definitely going to fall this year,” he said.

There are tens of thousands of farmers across the country who have prepared their fields for winter crops and are waiting to get hold of the farm’s vital inputs.

Gajendra Bhattarai, a farmer of Hoklabari, Morang has 2 bigha (1.35 hectares) of land uncultivated due to a lack of chemical fertiliser. Rudra Bhattarai of Aamtola, Rangeli, who owns 2 bighas of land, is similarly distressed.

“I need at least four bags [of 50 kg each] but have so far secured only a bag after trying for days,” said Gajendra Bhattarai. “We need it now.”

A drop in crop yields could drive up food prices, worsening inflation in a country where 4.9 million people are multidimensionally poor, which account for 17.4 percent of Nepal’s population.

Low yields will hurt the incomes of small farmers, which make up more than 60 percent of Nepal’s agricultural sector.

“Everything looks bad,” said Keshav Acharya, an economist. “The writing is on the wall that the country’s economy would head towards a catastrophe if no bolder plans are made now. The situation should be handled with care.” Amid this shortage of fertiliser could spell a disaster, experts warn.

Prices of nitrogen fertiliser, one of the most commonly used fertilisers to boost the production of crops, are at their highest levels in more than a decade.

For countries like Nepal, maintaining a smooth supply of chemical fertiliser will be “very very” difficult.

In Nepal, urea now costs Rs130 per kg, while the state-owned suppliers are selling it at Rs14 per kg. The DAP price has gone up to Rs145 per kg but it is priced Rs43 per kg at a subsidized rate.

The subsidy amount is over 90 percent now.

Even Nepal’s neighbour India, with whom Nepal plans to sign a government-to-government deal to import fertiliser, is one of the worst affected by a worldwide fertiliser crisis. India imports up to a third of its fertilisers and is the world’s biggest buyer of urea and di-ammonium phosphate, known as DAP. 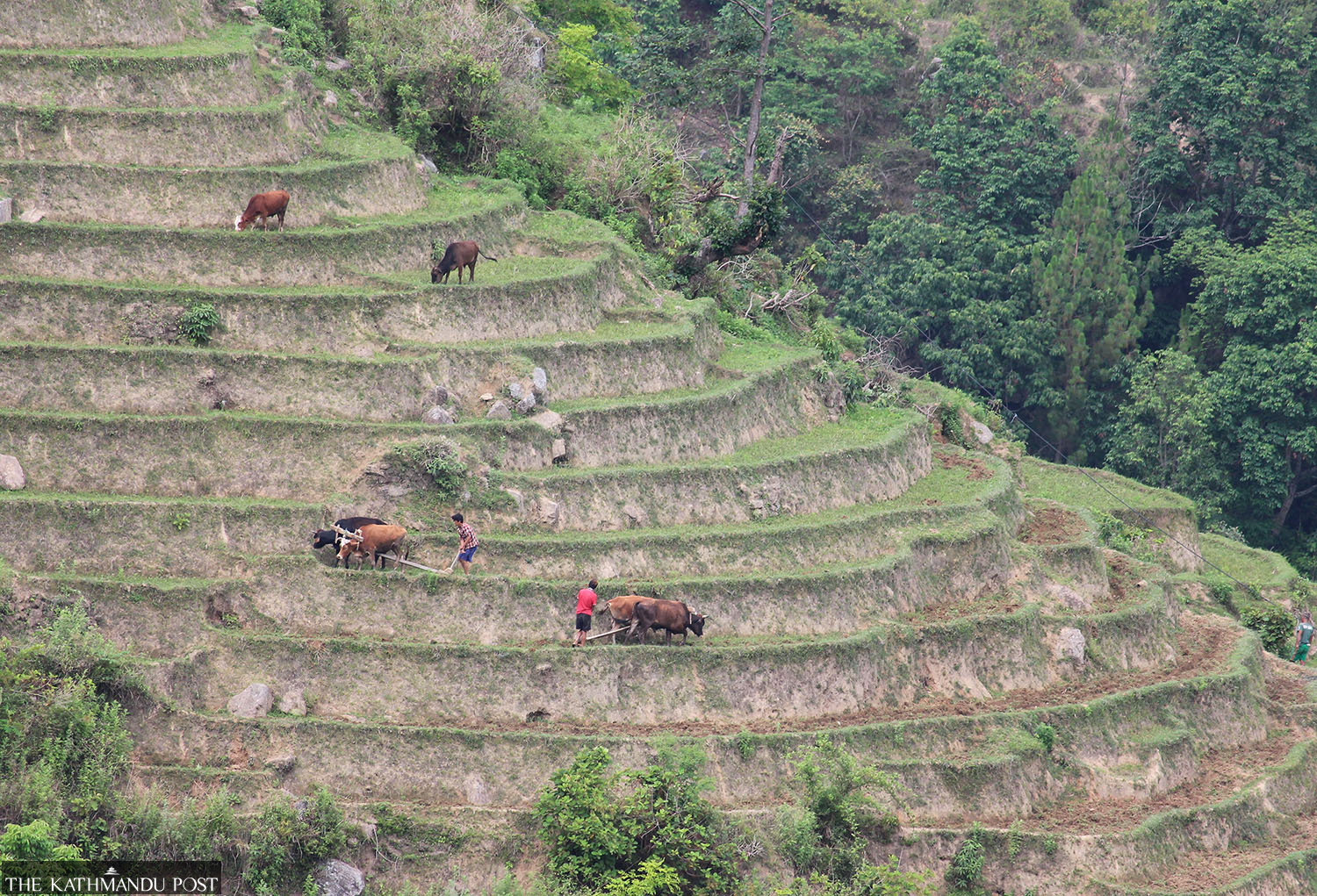 Fertiliser requires large amounts of natural gas in its production.

Holsether said Yara had been forced to cut some production due to higher gas prices, which had led to shortages. The chief executive said developing countries would be hit hardest by the shortages, with crop yields declining and food prices rising.

“It’s really scary, we are facing a food crisis and vulnerable people are being hit very hard,” he told the BBC’s Today programme.

According to reports, prices of crop nutrients have soared as tight coal and natural gas supplies forced some fertiliser plants in Europe to close. China and Russia have also curbed exports to safeguard domestic supply.

China, which is the world’s largest phosphate producer, suspended or severely limited exports of phosphate-rich fertilisers starting late July. The cuts are expected to last until June of next year, according to reports.

Russia has announced restrictions on nitrogen and phosphate fertiliser exports for six months effective from December 1.

Global nitrogen fertiliser sales were worth $53 billion in 2020, and prices are at least 80 percent higher so far this year. An acute shortage of fertilisers in Nepal has already started to disrupt the winter planting season mostly wheat, corn, mustard and pulses.

“The shortage is likely to stay long. We can foresee that the shortage will totally impact the paddy transplantation season in June next year,” said Joshi.

Chemical fertiliser has become a political commodity. Experts say it could stoke unrest among the country’s politically important farmers ahead of a series of crucial elections next year.

“The chemical fertiliser shortage could put the current coalition government into trouble,” said Yam Gaire, a soil scientist, who has worked in many agencies including the International Fertilizer Development Center, Dhaka, Bangladesh.

He said that ahead of crucial elections next year, the government would allocate some funds to finance chemical fertilisers. “But how long will it keep on financing is the question.”

Joshi of Salt Trading said that the burden of the increased cost should be divided between the government and the farmers equally to ensure a smooth supply as the prices keep on rising.

“But politicians would not take such an unpopular move. Increasing the fertiliser price means losing crucial election votes,” said Gaire. “As fertiliser increases crop yields by at least 20 percent, the shortage could spell a big disaster. Nepal could face a food crisis if fertiliser needs are not addressed on time.”

In October, unusual rainfall caused losses in paddy crops amounting to Rs11.87 billion. An estimated 424,113 tonnes of paddy on 111,609 hectares were destroyed.

There is a huge gap between demand and supply.

The incumbent Sher Bahadur Deuba administration has allocated an additional budget of Rs3 billion to finance chemical fertiliser imports on top of the Rs12 billion set aside by the erstwhile KP Sharma Oli administration.

The sum would be able to finance at least 500,000 tonnes of fertiliser.

But after the global price rise, the calculation has become different.

The Ministry of Agriculture and Livestock Development has estimated that the annual demand for fertilisers stands at around 600,000 tonnes.

A separate report by USAID, an international development agency, has shown that Nepal is highly dependent on smuggled fertilisers, and estimates that nearly 70 percent of the 600,000 to 800,000 tonnes of fertilisers consumed in Nepal is improperly imported.

“The crisis is deepening,” said Prakash Kumar Sanjel, spokesperson for the Ministry of Agriculture and Livestock Development. “We have already briefed the situation to the government.”

The Agriculture Ministry has requested the Finance Ministry to provide Rs13 billion in aid to mitigate the crisis as an immediate measure. “The proposed amount will finance an additional 131,000 tonnes,” said Sanjel, adding that they had written to the Finance Ministry last week and are waiting for a response.

According to Sanjel, the budget allocated for this fiscal year to finance fertiliser import has been almost used. “Over 100,000 tonnes have already been sold out to the farmers. A consignment of 45,000 tonnes is arriving,” he said.

After India ignored the proposal to sign a long-term government-to-government deal to import fertiliser, Nepal has formally written to China for the same, said Sanjel. “The situation is looking difficult. Now, it’s not in our hands to address the upcoming crisis.”

The planned deal with India is currently on hold, said Sanjel. It normally takes six months to procure chemical fertiliser following a global tender call under the Public Procurement Act. And in case the procurement is cancelled due to price volatility or other factors, it leads to havoc in the farm sector.

The new arrangement made through a government-to-government deal need not go through a lengthy procurement process, and it will ensure that farmers have adequate supply during times of shortages, according to ministry officials.

Chinese government mouthpiece Global Times said that Nepal is increasingly purchasing fertiliser from Chinese suppliers as India is also facing a shortage on its own, “highlighting India’s limited capacity to fulfil its pledges”.

Amid the surging demand, more fertiliser imports from China could be expected, the Global Times on November 23 quoted Nepali Embassy in China as saying.

“India is very likely to satisfy its own needs before supplying Nepal, even though India always said it is Nepal’s ‘big brother,'” Liu Zongyi, secretary-general of the Research Center for China-South Asia Cooperation at the Shanghai Institutes for International Studies, told the Global Times.

“A contract has already been inked to import around 15,000 tons of fertiliser from [Northwest China’s Qinghai Province]… if the Chinese manufacturers would meet the required standard and offer competitive prices, they will have a huge market [in Nepal],” Ray said.

In October 2015, Nepal signed a historic oil trade deal with China to lessen its dependence on India, its large neighbour to the south. The move was prompted after India imposed a border blockade, stopping all daily essentials including fuel.

The oil deal with China, however, couldn’t materialise.

“Most of the countries, including India and China, are dealing with the issue [chemical fertiliser] seriously. In Nepal, the government seems busy with its internal politics,” said Acharya, the economist.

“Economy has never been Nepali politicians’ priority. It is still not.”